The Scala Improvement Process (sometimes called SIP process) is a process for submitting changes to the Scala language. This process aims to evolve Scala openly and collaboratively.

The SIP process covers the Scala language (syntax, type system and semantics) and the core of the Scala standard library. The core is anything that is referenced from the language spec (such as primitive types or the definition of Seq). The SIP process is not concerned with compiler changes that do not affect the language (including but not limited to linting warnings, optimizations, quality of error messages).

The committee follows the following process when evaluating SIP documents, from an idea to the inclusion in the language.

From being an idea to being part of the language, a SIP goes through several Stages that indicate the “maturity” level of the SIP. The following table summarizes the intent of the various stages.

The process in one graph 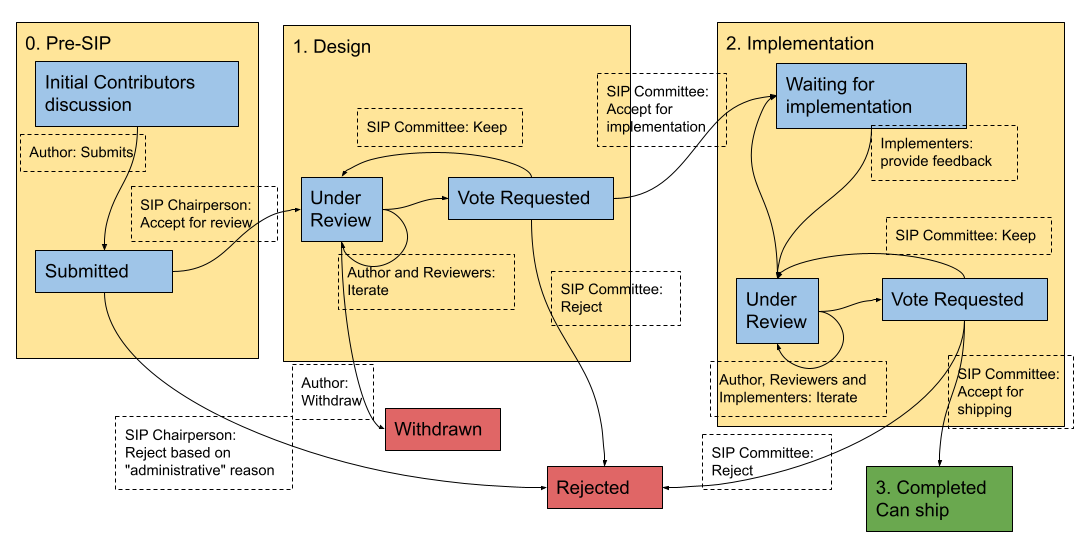 To initiate a discussion, any individual opens a “Pre-SIP” post in the Scala Contributors forum. The post should be in the Scala Improvement Process category, and its title should start with “Pre-SIP:”. The purpose of the Pre-SIP post is to present an idea to the Scala community: a Pre-SIP should present a problem that needs solving (i.e., motivate the changes) and present possible solutions with pros and cons. The community is encouraged to engage in the discussions by voicing support, comments and concerns.

Once at least one month has passed and the author has built some community support for their Pre-SIP, they can Submit a SIP for discussion by the Committee. “Community support” is loosely defined. It involves a mix of positive comments, likes, etc. Generally, the Chairperson or a Committee member will post a comment on the thread suggesting to submit a SIP when they see that a Pre-SIP is ready to enter the process.

Entry into the process (SIP Submission)

To submit a SIP, a SIP Author writes a pull request to the scala/improvement-proposals repository, following the tutorial, and pointing to the Pre-SIP discussion. If the proposal correctly follows the template, and the Pre-SIP discussion seems to show some community support, the Chairperson will accept the SIP for review, assign a SIP number, and assign 3 reviewers to the SIP among the Committee Members. Since “community support” is loosely defined, any Committee Member can also comment on the PR to accept the SIP for review (this is meant mostly as an escape hatch to prevent the Chairperson from unilaterally blocking a SIP from entering the process). From that point onwards, the SIP has entered the Design Stage.

If the template has not been correctly followed, or if none of the Committee Members nor the Chairperson think that the Pre-SIP has gathered enough support, the PR may be closed after 2 weeks.

As soon as a SIP PR is opened, the GitHub labels stage:pre-sip and status:submitted are applied to it. At any given moment, a SIP PR will have as labels one of the following possibilities:

Once a SIP has entered the Design Stage, the assigned reviewers will review (as a GitHub Review on the SIP PR) the proposal within 3 weeks. The authors may then address the concerns by pushing additional commits and ask for a new review. This phase is iterative, like any pull request to an implementation repository. After each request for a new review, the reviewers have 3 weeks to do another round.

When the reviewers are confident that the SIP is in good shape to be discussed with the full Committee, they set its status to “Vote Requested” and decide on a Vote Recommendation that they will bring to the Committee. A Vote Recommendation is either “Recommend Accept” or “Recommend Reject”. The proposal is then scheduled on the agenda of the next Committee meeting (which happens once a month).

At any time, the SIP Author may voluntarily Withdraw their SIP, in which case it exits the process. It is possible for someone else (or the same person) to become the new SIP Author for that SIP, and therefore bring it back to the process. If a SIP Author does not follow up on Reviewers’ comments for 2 months, the SIP will automatically be considered to be Withdrawn.

In order to be accepted for implementation and advance to the next stage, a SIP must gather strictly more than 50% of “Advance” votes among the members present (this means that an abstention is equivalent to “Do not advance” for this purpose, biasing the process in favor of the status quo). The PR for the SIP is then also Merged at this point.

If there was no strict majority in favor of “Advance”, a second vote between Reject and Keep will be used. A proposal needs more than 50% “Reject” votes to be rejected in that case. Otherwise, it is kept.

Once in the implementation stage, the Committee is not concerned with the SIP anymore, until new concerns are discovered or until the implementation is ready. The SIP is now a recommendation for the compiler team or any other individual or group of people to provide an implementation of the proposal, as a pull request to the Scala 3 compiler repository. There is no set timeline for this phase.

Often, proposals not only need to be implemented in the compiler, but also in several other tools (IDEs, syntax highlighters, code formatters, etc.). As soon as a proposal reaches the implementation stage, the Committee notifies the impacted tools that they should start implementing support for it. A list of tools of the ecosystem is maintained in this document.

The implementers may hit challenges that were not foreseen by the Committee. Early users may also provide feedback based on practical experience with the Experimental feature. This feedback can be sent back to the Committee by implementers. This is done with a PR to the SIP repository, amending the previously merged SIP document or raising questions for challenges. In that case, the SIP Author and Reviewers will work together with the implementers to address the feedback. This is again an iterative process. Reviewers may merge changes to the proposal at their discretion during this phase.

Once the implementation is deemed stable, including appropriate tests and sufficient support by the tooling ecosystem, the implementers and reviewers can schedule the SIP to the next Committee meeting for final approval. Once again, a SIP needs to gather strictly more than 50% “Accept” votes to be Completed. If that is not achieved, it may likewise be sent back for refinements, or be rejected, with the same rules as in the “Design Stage – Vote” section.

Once a SIP is accepted for shipping, it will be enabled by default (as non-Experimental) in the next practical Minor release of the language.

From this point onwards, the feature is stable and cannot be changed anymore. Any further changes would have to come as an entirely new SIP.

The current committee members are:

The current Chairperson is:

The plenary Committee Meetings are scheduled monthly by the Chairperson. They have the following purposes:

Responsibilities of the Committee Members

Experts in some fields of the compiler may be invited to concrete meetings as guests when discussing related SIPs. Their input would be important to discuss the current state of the proposal, both its design and implementation.

On what basis are proposals evaluated?

The Committee ultimately decides how to evaluate proposals, and on what grounds. The Committee does not need to justify its decisions, although it is highly encouraged to provide reasons.

Nevertheless, here is a non-exhaustive list of things that the Reviewers and Committee are encouraged to take into account:

The present document tries to account for most situations that could occur in the lifetime of SIPs. However, it does not pretend to be an ultimate solution to all cases. At any time, the Committee can decide, by consensus, to make exceptions to the process, or to refine the process.

How do I submit?