A diverse and comprehensive set of libraries is important to any productive software ecosystem. While it is easy to develop and distribute Scala libraries, good library authorship goes beyond just writing code and publishing it.

In this guide, we will cover the important topic of Binary Compatibility:

Before we start, let’s understand how code is compiled and executed on the Java Virtual Machine (JVM).

Scala is compiled to a platform-independent format called JVM bytecode and stored in .class files. These class files are collated in JAR files for distribution.

As a result of this execution model:

Let’s illustrate this with an example:

Consider an application App that depends on A which itself depends on library C. When starting the application we need to provide the class files for all of App, A and C (something like java -cp App.jar:A.jar:C.jar:. MainClass). If we did not provide C.jar or if we provided a C.jar that does not contain some classes/methods which A calls, we will get classloading exceptions when our code attempts to invoke the missing classes/methods.

These are what we call Linkage Errors – errors that happen when the compiled bytecode references a name that cannot be resolved during runtime.

What about Scala.js and Scala Native?

Similarly to the JVM, Scala.js and Scala Native have their respective equivalents of .class files, namely .sjsir files and .nir files. Similarly to .class files, they are distributed in .jars and linked together at the end.

However, contrary to the JVM, Scala.js and Scala Native link their respective IR files at link time, so eagerly, instead of lazily at run-time. Failure to correctly link the entire program results in linking errors reported while trying to invoke fastOptJS/fullOptJS or nativeLink.

Besides, that difference in the timing of linkage errors, the models are extremely similar. Unless otherwise noted, the contents of this guide apply equally to the JVM, Scala.js and Scala Native.

Before we look at how to avoid binary incompatibility errors, let us first establish some key terminologies we will be using for the rest of the guide.

Therefore, build tools like sbt and Gradle will pick one version and evict the rest when resolving JARs to use for compilation and packaging. By default, they pick the latest version of each library, but it is possible to specify another version if required.

Two library versions are Source Compatible with each other if switching one for the other does not incur any compile errors or unintended behavioral changes (semantic errors).
For example, If we can upgrade v1.0.0 of a dependency to v1.1.0 and recompile our code without any compilation errors or semantic errors, v1.1.0 is source compatible with v1.0.0.

Two library versions are Binary Compatible with each other if the compiled bytecode of these versions can be interchanged without causing Linkage Errors.

Relationship between source and binary compatibility

While breaking source compatibility often results in binary incompatibilities as well, they are actually orthogonal – breaking one does not imply breaking the other.

There are two “directions” when we describe compatibility of a library release:

Backward Compatible means that a newer library version can be used in an environment where an older version is expected. When talking about binary and source compatibility, this is the common and implied direction.

Forward Compatible means that an older library can be used in an environment where a newer version is expected. Forward compatibility is generally not upheld for libraries.

Binary Compatibility matters because breaking binary compatibility has bad consequences on the ecosystem around the software.

Constant binary compatibility breakages in libraries, especially ones that are used by other libraries, is detrimental to our ecosystem as they require time and effort from end users and maintainers of dependent libraries to resolve.

Let’s look at an example where binary incompatibility can cause grief and frustration:

An example of “Dependency Hell” 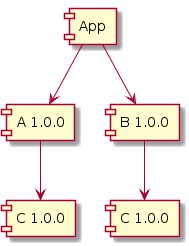 Sometime later, we see B v1.1.0 is available and upgrade its version in our build. Our code compiles and seems to work, so we push it to production and go home for dinner.

Unfortunately at 2am, we get frantic calls from customers saying that our application is broken! Looking at the logs, you find lots of NoSuchMethodError are being thrown by some code in A! 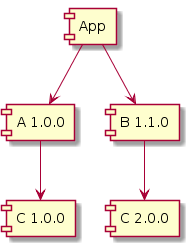 Now imagine if App is more complex with lots of dependencies themselves depending on C (either directly or transitively) - it becomes extremely difficult to upgrade any dependencies because it now pulls in a version of C that is incompatible with the rest of C versions in our dependency tree!

In the example below, we cannot upgrade to D v1.1.1 because it will transitively pull in C v2.0.0, causing breakages due to binary incompatibility. This inability to upgrade any packages without breaking anything is commonly known as Dependency Hell. 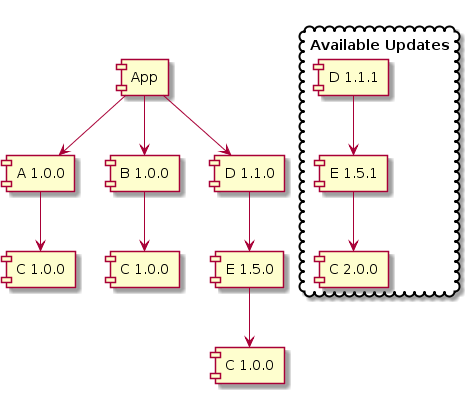 How can we, as library authors, spare our users of runtime errors and dependency hell?

By incorporating MiMa’s sbt plugin into your sbt build, you can easily check whether you have accidentally introduced binary incompatible changes. Detailed instruction on how to use the sbt plugin can be found in the link.

We strongly encourage every library author to incorporate MiMa into their continuous integration and release workflow.

Binary compatibility breakages can often be avoided through the careful use of certain Scala features as well as some techniques you can apply when modifying code.

For example, the use of these language features are a common source of binary compatibility breakages in library releases:

Again, we recommend using MiMa to double-check that you have not broken binary compatibility after making changes.

Library authors use versioning schemes to communicate compatibility guarantees between library releases to their users. Versioning schemes like Semantic Versioning (SemVer) allow users to easily reason about the impact of updating a library, without needing to read the detailed release notes.

Given a version number MAJOR.MINOR.PATCH, you MUST increment the:

According to SemVer, patch versions should contain only bug fixes that fix incorrect behavior so major behavioral change in method/classes should result in a minor version bump.

Many libraries in the Scala ecosystem has adopted this versioning scheme. A few examples are Akka, Cats and Scala.js.

Why is binary compatibility so important such that we recommend using the major version number to track it?

From our example above, we have learned two important lessons:

Therefore, binary incompatible releases should be avoided if possible and unambiguously documented when they happen, warranting the use of the major version number. Users of your library can then enjoy simple version upgrades and have clear warnings when they need to align library versions in their dependency tree due to a binary incompatible release.

If we follow all recommendations laid out in this guide, we as a community can spend less time untangling dependency hell and more time building cool things!